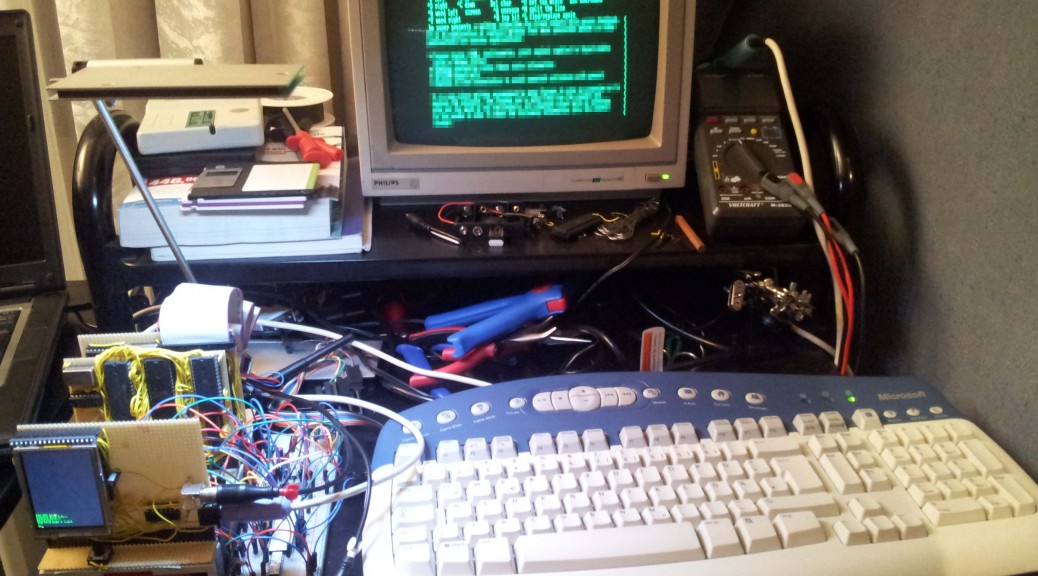 Meanwhile I have soldered most of the Z80 parts on some board connected by a bus board. I will describe the complete system running CP/M 2.2 in the upcoming posts, board by board.

The system boots CP/M 2.2 from the floppy disk by loading the first two tracks from the disk into memory. It does not have BASIC or a monitor in ROM. Updating the system with new software or BIOS is very easy as the floppy disks can be read and written by any PC using CP/M tools. No need for a serial connection or writing a new ROM.

During the boot the TFT is selected as the video output. Afterwards you can select the CRT as the output by pressing F2 (and switch back to TFT with F1). This is useful for programs like WordStar which need 80×25. The TFT does not have ANSI support as space in BIOS is very limited and the ATMega 328p supports it on the larger screen.

The system also has a Wifi card (USR-WIFI232-T) which is interfaced via a 16C550 serial connection. The system currently has no BIOS support for it but it possible to communicate using BASIC or anything else that has I/O commands. Currently it is in an experimental stadium implemented on a breadboard connected to the bus board via wires,

The system is powered using a 5V power supply while it is also possible to power it using 4 batteries.